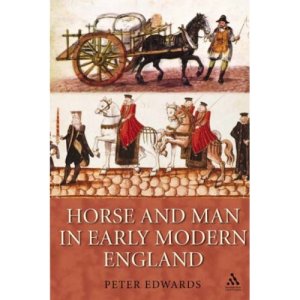 The presentation of history in the 21st century brings challenges and insecurities along with a host of new opportunities. It is not sufficient now for a historian to rely on an in-depth, well-researched, factually sound and clearly-reasoned narrative. There must also be consciousness of gender and other issues including animal rights; and knowledge of matters beyond the historian’s chosen field of research. Projects can be inter-disciplinary affairs, resulting not only in an ever expanding bibliography but also greatly expanded awareness of historical subjects. On the whole this leads to a richer, deeper, knowledge of the past.

The opening chapters of Peter Edwards’ book, Horse and Man in Early Modern England clearly show his awareness of many modern issues facing the historian, particularly regarding human attitudes to animals and the danger of anthropocentrism. The title, however, makes it clear that the subject matter is both animal and human; and Edwards makes it equally clear that “as a social and economic historian rather than an anthropologist my approach remains determinedly anthropocentric.”

How did people view horses in early modern times?

It’s worth stating clearly here that Edwards’ work is a valuable reminder of the strengths of history based on solid knowledge that clearly comes from years of scrupulously researched and scrutinised documentary evidence; as he says, “a quick glance at the biobliography reveals that I remain a document-based, empirical historian”. However, he follows this with the statement, “but I have tried to incorporate some of the ideas I have picked up from other quarters.”

Edwards’ work is soundly based on intensive investigations into original sources, particularly toll books, national records such Exchequer, Chancery and probate accounts, assizes and the archives of individual families.

One of the successful incorporations of other ideas can be seen in a recurring theme within the book, that of increasing theophilia (pro-animal sentiment) from the early 17th century onwards, perhaps most clearly evidenced in the work of Margaret Cavendish, Duchess of Newcastle. Frequently satirised during her life, her work now has a rationale and meaning that has at last found its time. The first chapters of Edwards’ book relate to the various relationships between humans and horses – whether enlightened or not –  and chart a progress from the relatively unenlightened 16th century, in which the philosopher Montaigne stands out for his respect for animals, through increasing theophilia in the 17th century.

Edwards does not shrink from the reality of the times, though; an important aspect of the early modern period is the casual cruelty that was meted out whilst men dominated, or attempted to dominate the environment, including animals, and including, of course, horses. The late 16th and early 17th centuries saw the publication of a number of practical guides to horse training and treatment, some of which followed relatively enlightened approaches whilst others advocated harsher means, often in imitation of continental “horsemen” such as Grisone.

Intriguing social aspects of horse keeping and use

Subsequent chapters deal with practical uses for horses and the social implications of this. Horses – in general – provided status but they were also bound up in complex ways with issues of sexuality and competence.

Other themes discussed within the book are changing social and military requirements leading to new breeds and types of horse; the multipurpose uses of some horses; and the breeding of specific types for specific purposes, laying the foundations for the huge range of horses available for commercial, industrial and sporting requirements by the 19th century. In particular of course, the development of the thoroughbred takes place in the early modern period as does increasing coach and carriage use, the latter being particularly responsible for immense social changes.

“The Cavalry and Early Modern Warfare” is an important chapter both for charting the changes in cavalry and other mounted troops throughout the period and in its relationship to other chapters on raising, training and using horses. It is perhaps also the most difficult chapter since the topic is so great and has been covered elsewhere. Edwards’ extensive documentary-based comments regarding pricing, sizes of horses, supply and so on provide a very interesting background to the actual application of cavalry in the field. The practical aspects relating to supply and demand outlined in the section “The County Militia” for instance, provide fascinating detail of how horses and related items were supplied to the military when required.

The book is not lacking in anecdotes provided by the documentary evidence. For instance, in 1569 the Privy Council told its commissioners to revise the much abused rating system for horse musters first put into place under Queen Mary (basically, from the government’s perspective, far fewer horses were available because some individuals had been under-assessed). The Nottinghamshire gentry replied en masse: “‘We doe not knowe that we are chargeable by anie lawe to so great a burthen as by your lordship hath been geven us severally in note for to furnish, touchinge dimi-lances and light horsemen.’ They protested that they could not afford to provide the numbers for which they were assessed, grumbling that ‘it is farre more then we and oure livinges proporconally for eche one was able to perfourme.'”  No one likes to pay the government, of course.

On the other side, officials came out with some excoriating comments on the quality of horses and cavalry available to them: “very mean”; “evil opoynted and badly furnished”; “very much impaired and out of order”; “for the most part defective both in arms and serviceable horses”; and so on.

There is, of course, an excellent bibliography but the index and the glossary are not quite so good. I would have liked more terms used in the chapter on the cavalry included in the glossary. The images reflect the widespread uses of the horse but the detail is very hard to make out in more than one of these; and since it is the detail that is referred to, it would have been better to be able to see this clearly.

Finally, almost as a companion volume to this, there is Edwards’ book The Horse Trade of Tudor and Stuart England“, Cambridge, 1988, which precedes the review publication. Again based greatly on documentation of the period, particularly toll book records, the earlier book outlines the provision of horses through various means, from which theft is not excluded, to provide a fascinating in-depth view of the times.

1 thought on “Review: Horse and Man in Early Modern England”

This site uses Akismet to reduce spam. Learn how your comment data is processed.